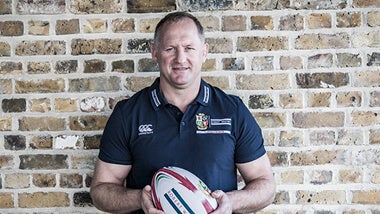 Richard Hill, often called the ‘silent assassin’ on the pitch, has recently been appointed the national Rugby Team Manager off the pitch ahead of the autumn’s Old Mutual Wealth series.  The former Saracens and England star took time out of his busy schedule and caught up with us to discuss the science behind recruiting and fielding the best.

“I’m aware of players who lived together, who played practical jokes on each other, or one person who’d certainly played a practical joke on another one and hid his letter for half a day,” explained Richard Hill.

“Which personally I think is a bit cruel when it’s British and Irish Lions selection, since it’s such a proud thing and you’re left there knowing the post has arrived and you think there’s no letter. But it beats, probably, the first time I found out about playing for England, which was teletext,” Hill added. Times have clearly changed.

Despite being able to trace their roots all the way back to 1888, the Lions have always come across the same challenge tour after tour, and that is gelling all 4 home nations together and establishing a united team. Warren Gatland may make all the calls and set the culture, but Hill explained that,

“It’s everyone’s responsibility from the moment you make the first meeting where you’ve got to put aside national pride, possibly the incidents that may have happened in previous club and international games.”

Time is always a crucial factor when preparing for a Lions tour. “It’s about creating an instant bond and being able to merge different cultures and personalities,” continued Richard Hill.

“It’s imperative to have that ability to accept where you are and what you’re trying to achieve by understanding what the outcome is, and the outcome is to win a test series.”

There’s no doubt that the Lions take team culture seriously as it is a pivotal part of building a successful team,  however Hill recalls a few bizarre methods during the 2005 tour to New Zealand.  From wet sponge fights to dragon boat racing, the 2005 tour squad, that included rugby stars Paul O’Connell and Shane Williams, went as far as creating a percussion band during the tour.  According to Richard, “the final product didn’t sound too bad”.

The summer of 2017 is a distant marker for players hoping to be in Warren Gatland’s squad with the Autumn Internationals and RBS Six Nations fixtures still to be played.  Hill knows too well of the unfortunate nature of professional sports but on the brighter side he added, “a lot of things can happen positively for players” when trying to impress.

Whatever happens between now and Gatland’s squad announcement in April, there’s a lot of rugby to be played and it promises to be fascinating.