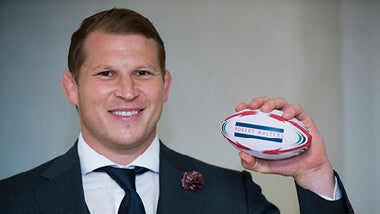 Sitting comfortably in front of a crowd of 80 excited guests at the Ivy Club last Thursday, Dylan Hartley looked confident for a man still only 30 years young. As an international and club rugby captain, speaking to an audience is a daily routine but it could have been so different for the man from Rotorua.

Born in New Zealand, Dylan travelled to the UK on a school exchange programme aged 16, where he stayed with family in Sussex and played rugby for Crowborough, ‘a good grassroots club, with good people.’

It was there that his talent for the game was identified and resulted in Dylan being picked for junior International honours. Reminiscing about his gap year, he said;

‘My aim wasn’t to come to England to play professionally, I was only 16 at the time, and I just loved the game. I brought my boots, my 2 mega pixel camera, and I chucked them in along with my trainers.’

On returning to New Zealand, within weeks, he received a call from his uncle explaining a letter had arrived addressed to Dylan with a familiar stamp on the envelope.

‘I couldn’t think what it may have been, but he (Dylan’s Uncle) read the letter out to me and I was invited to the England Under 19s camp in Bath.  So I was left with a decision, do I go back to the UK and give this a real go, or do I go back to school in NZ not knowing what opportunities could arise.’

He describes it as a ‘sliding doors moment’ and with his parents buying him a one way ticket to the UK, he was recruited by Worcester Warriors Academy in the process.

From a personal perspective the combination of self-belief, determination and hard work has led Dylan to the top of the International game. Most importantly however, he attributes much of the recent success to the importance that has been placed in fielding the best people on and off the rugby field. An approach that resonates very highly with Robert Walters as a business.

Robert Walters wish him well this autumn and for a successful next 12 months.